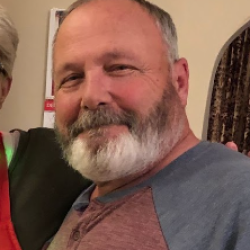 Jerry was born in Hastings, Minnesota, on Christmas Eve in 1953 to Clarence and Naomi Hicks. So, while some birthday presents might have come wrapped for the season, Jerry never let it spoil his love for his favorite holiday, or dampen his Christmas cheer.

He attended Hastings High school, where he excelled in wrestling, and he later graduated with an architect draftsman degree. However, he never put that degree to use, as his life brought him to Illinois, where he met and married the love of his life, Penelope. They had one child, Nick, before his career in retail forensic investigations brought the family to Colorado in 1994, where he lived and worked until he retired in 2014.

But retirement didn’t stop him from working. After moving back to Illinois, he completed his locksmith training, started a backyard vineyard, and completed his certification for forensic interviewing. In addition, he held a part-time job as a security guard during the week, when he wasn’t fishing, or doing yard work and other odd jobs around the house.

After a brief battle with lung disease, Jerry passed away peacefully on April 12th, 2022, at Decatur Memorial Hospital with his wife by his side. He is preceded by his parents; father-in-law, eleven siblings, and two brothers-in-law. He is survived by his wife, Penny Hicks, his son and his husband, Nick and Alix Hicks, mother-in-law, Dorthy Bell, and many nephews, nieces, and cousins.

Even in his final hours, he held onto his sense of humor, which he was well known for. Jerry would give you the shirt off his back without asking for anything in return. He was a tender man, with a kind nature, who could understand and relate to almost anyone.

In honor of his memory, his family wishes for any donations to be given to the American Lung Association.