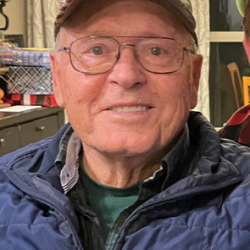 Jerry Lee Jordan, 82, of Clinton, passed away on Sunday, January 30, at his home, surrounded by his
family.

Jerry was born on November 13, 1939 to Edwin and Sally Jordan. He graduated from DeLand-Weldon
High School. Jerry was preceded in death by his parents, daughter Jill Jordan, and son J.C. Jordan. He is
survived by wife, Mary Jordan, son Jack Jordan, daughter Julie (Mark) Tedrick, seven grandchildren,
Rebecca (Adam) Moore, Kristina Jordan, Jack Jordan, Ethan Jordan, Joshua (Jackie) Guin, Taylor
(Alexander) DeYoung, and Drew Tedrick; seven great-grandchildren, Kylie Jordan, Kendall Jordan, Kory
Merriman, Kolten Merriman, Hailey Moore, Alex Moore, and Jedidiah Guin.
Jerry was a life-long farmer who fully retired when he was 80. Jerry was “red” all the way and loved
giving grief to the “green”. Farming was his passion and he dedicated much of his life to this profession.
He had an adventurous spirit and liked camping/ATV trips with family. He also enjoyed meeting for
coffee with friends and playing Bingo at the Friendship Center. Jerry was a member of the First Christian
Church in Clinton.

He will be dearly missed by his family and friends, but the Jerry Jordan-isms will live on in the heart of
his children and grandchildren!

Services will be held at First Christian Church in Clinton on Saturday, February 5 th , 2022. Visitation
begins at 10 am followed by a memorial service at 11 am.