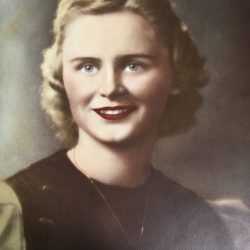 Mary worked at Curtis Wright in St. Louis helping build “Hawk 75” fighter aircraft during WW2.  After the war, she worked as a  as a beautician, and later, at Sangamo Electric and Franklin Life.  She enjoyed dancing, big band music, country music, Richard Gere movies, and manicuring her lawn.  Her greatest joy was found in helping care for her family – especially her grandchildren and great grandchildren.

Mary is preceded in death by her father; Mathew, her mother; Mary, her husband; Noble, and her son; Ron.

She leaves to cherish her memory her son; Bernie Schoby of Normal IL, granddaughters; Lori Reuter of Jacksonville NC and  Andrea Schoby of Bloomington IL, a step granddaughter; Ronda Roy of Chatham, IL (and her children and grandchildren).

In lieu of flowers, please  donate to PBS.