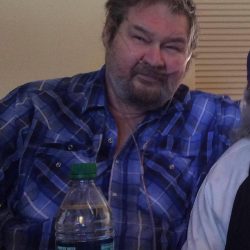 He was a welder and retired from Caterpillar after 40+years as well as a Navy veteran.
Survived by: his wife Kathy of Maroa, daughter Julie (Kelli) of Decatur, son Stephen (Anita) of Chatsworth, grandchildren, Jessica, Emma, and Aidan, sister, Diana Riley(David) of Maroa, Timothy Harbarger(Debbie) of Latham, Aunt Joyce of Paxton,his beloved dog Sophie, several nieces and nephews, great-nieces and great-nephews.  He was preceded in death by his parents, brother in law David RIley.
A memorial will be held at a later date for family and friends.
Ron will be remembered and greatly missed from everyone that knew him.
Mr. Harbargers ashes will be buried at Camp Butler with Military Honors later this year.