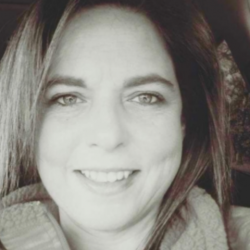 Therese Marie Cotter 51, of East Peoria passed away on Thursday November 11, 2021, at her residence.
Therese was born on January 28, 1970, to John Michael Cotter and Winfred Camille Smith-Cotter who
preceded her in death in 2008 and 2013.

Her favorite season of the year was fall; she loved the colors the leaves made as they hit the ground.
Therese grew up in the catholic church. Later, she discovered she was more interested in wiccan beliefs,
but never stopped believing in God. Her greatest joys were her children, until she had her first grandchild,Liam.

Therese would stay nights at her son’s, just to help and allow her son and daughter-n-law to get some rest. She would sit and play with him for hours and never complain.

Therese was her children’s angel without wings, their first love. She would take her children on outings to the carnival, but the best memories were watching the meteors in the sky, as she explained to them what they were witnessing. She loved reality TV and 80’s movies. She watched The Office and The Breakfast Club on repeat.

She never met a stranger. Therese would give you the coat off her back if you asked. She was a big
animal lover, especially pigs, sloths, and dragonflies. Therese leaves to cherish in her memories; her two sons Andrew (Jessica) Cotter and Zachary Cotter both of IL. One brother Shaun (Dawn) Cotter of IL. One sister Harriet (Michael) Moon of IL. One grandson Liam Johnathan Cotter of IL and a special daughter-n-law Jessica Fannon of IL.

Services have been entrusted to Central Cremation Center and will be posted at a later date.